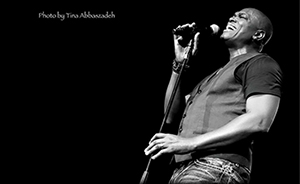 The songs cover a wide territory stylistically and, of course, deliver a lot of Doc's trademark East Bay Soul style, but also vary to even include Doc's first released Christmas song, "Christmas is For Kids", a request made by his fans for many years. "Nature Doesn't Legislate", the title track, is a funky, soulful warning to take care of our planet, in the vein of "Only So Much Oil in the Ground". "I Guess the Old Folks Were Right After All" delivers a spot-on Randy Newman-style feel, and "I'm So Happy She Said Yes", "Do I Qualify", "That's What You Mean to Me", and "Must Have Been an Angel" deliver as powerful, soon-to-be-classic ballads.

"Better But Not Good", "Virtual Reality Heaven", "When I Say We, I Mean You", and "Downbeat on an Upbeat Swing" bring the funky grooves and the tongue-in-cheek "Football After Church" is a tribute to the great American tradition loved by so many.

Get your copy today!